“The Spirit of Central Avenue: Classic Sounds from Los Angeles’ Musical Heyday (1920-1960)” was curated by Dexter Story, a veteran musician, composer and producer who brings decades of experience in creating enjoyable public soundscapes and live music experiences. This project offered Story an opportunity to source his Los Angeles background and passion for deep historical curation.

“Los Angeles’ Central Avenue between 1920-1960 thrived as a music industry touring and recording hub for the nation's best jazz and rhythm & blues talent, particularly for the African American community confined to the area by restrictive civic ordinances. Prominent musicians and vocalists of the period including Louis Armstrong, Ella Fitzgerald, Duke Ellington, Billie Holliday, Dizzy Gillespie, Charlie Parker, Etta James and Nat Cole all performed and gathered in this West coast mecca known for venues as diverse as the Dunbar Hotel, Club Alabam, The Lincoln Theater, The Downbeat, Jack’s Basket Room and Elk’s Hall. In addition to being home to a pantheon of superstar artists and their audiences, Central Avenue was also my beloved father Benny’s hang after migrating to Los Angeles from the South in the early 1950s. During my childhood, I heard the sounds in this inspired playlist, ranging from swing jazz, big band and bebop to blues, rhythm & blues and early American pop music.”

Listen to the Playlist 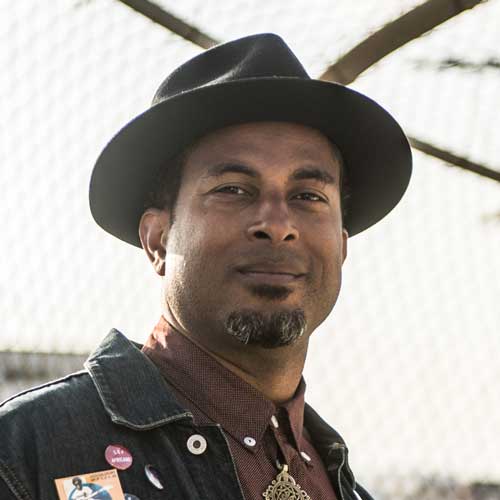 Dexter Story is a multi-instrumentalist, composer, producer and musicologist from South Los Angeles, CA. He has worked in multiple facets of the music industry, from marketing at Priority and Def Jam Records to talent buyer at the legendary L.A. venue Temple Bar. With an M.A. in African Studies and two recent northeast Africa-influenced albums “Wondem” and “Bahir”, released on the UK-based Soundway record label, Story is currently a Eugene V. Cota-Robles and Jacqueline DjeDje fellow in the ethnomusicology Ph.D. graduate program at the University of California, Los Angeles; his research focuses on music of the African diaspora, particularly music and culture of the African Red Sea. He is also an artist-in-residence and production consultant with South Los Angeles’ Community Coalition, a community organizing and advocacy non-profit. He is based in Los Angeles with his wife Annette and has three older children. More information at dexterstory.com